MV Derrycunihy
Jack Ainsworth (3058976)
Trooper - Reconnaissance Corps, R.A.C - 43rd (2/5th Bn. Gloucestershire Regt.) Regt.
24 June 1944, aged 26
Born in Rotherham in Q1 1919
Lived in East Herringthorpe
Son of Thomas and Mabel Ainsworth; husband of Nellie Ainsworth, of East Herringthorpe, Rotherham, Yorkshire.
Married in Rotherham in Q2 1941
Bayeux Memorial
On 18 June 1944 HQ, A and C squadrons of the 43rd (Wessex) Reconnaissance Regiment embarked  at West India Docks, London, aboard the MV Derrycunihy (T72). She joined a convoy off Southend-on-Sea and arrived off Sword Beach on the evening of 20 June. High seas and enemy shelling prevented unloading for three days and it was decided  to move T72 to Juno Beach for disembarkation. As the ship started engines at  07:40 on the morning of 24
June it detonated an acoustic or 'Oyster' mine dropped by one of the nightly Luftwaffe raiders. The mine exploded under the  keel, splitting the ship in two, and the after part, packed with sleeping men  of 43 Recce, sank rapidly. Worse still, a 3-tonner ammunition lorry caught  fire, and oil floating on the water was set alight. 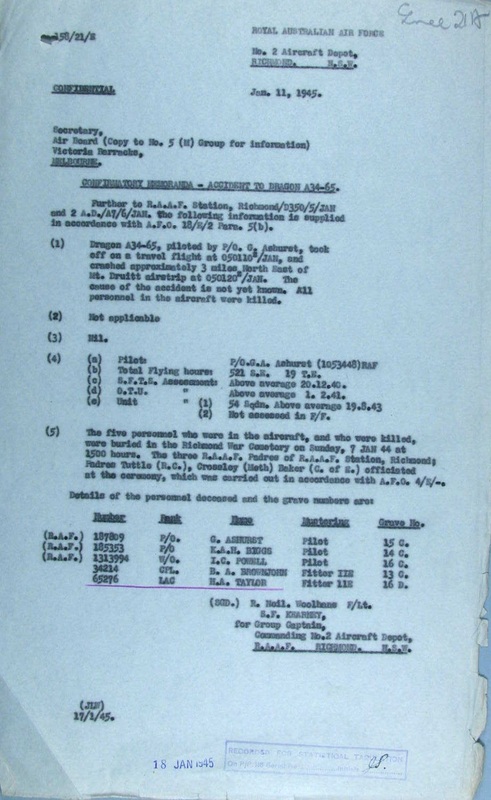 Pilot Ashurst is shown as being assessed as Above Average

Lancaster R5702 after being badly shot up in November 1942 and crash landing back in the UK. The aircraft was repaired and sent back on operations.
George William Atkin (P/KX 84056)
Leading Stoker - Royal Navy - H.M. Submarine Grampus
24 June 1940, aged 27
Date of Birth 21 February 1913
Birth reg'd in Rotherham in Q1 1913
Portsmouth Naval Memorial
On 16 June 1940, Grampus was laying mines in the Syracuse and Augusta, Sicily area. She was seen by the Italian Spica-class torpedo boat Circe, which was on anti-submarine patrol with Clio, Calliope, and Polluce. Within a very short time, Grampus was destroyed. Wreckage came to the surface along with air bubbles and oil. Polluce was credited with the kill.
googlead4fc616d548553d.html