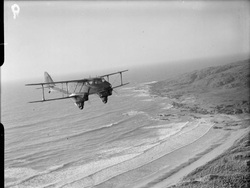 © IWM (CH 14714) A De Havilland Dominie in flight
John Bates was born in Rotherham, the birth registered in the third quarter of 1916. He was the second child of John
Henry Bates and Ellen (nee Frost). The couple had four more children and lived at 7 Winifred St, Rotherham. John
attended Ferham Road Council School & Rotherham Grammar School before working in the LMS Railway Office. He
was a keen cricketer and played for Rotherham Town CC. After war was declared john became a member of the Home Guard.
John enlisted in November 1940 and joined the Royal Air Force Volunteer Reserve, service number 1073782. He was a Aircraftman 2nd Class (Wireless Operator – Under training). As part of his training LAC2 Bates was posted to 2 Signals School at RAF Yatesbury, Wiltshire. On 27 May 1941 he was on board De Havilland DH89A Dominie trainer aircraft, serial number R5929 when it stalled and crashed Easton Hill, near Bishops Cannings, Wiltshire.
John Bates was 24 when he died and he was buried in Kimberworth (St Thomas) Churchyard.

Roy Chesworth was born in Rotherham on 19 November 1923 to Charles Henry Chesworth and Emily (nee Wall) of 32 Broom Ave, Rotherham. He was the second child of the couple who had married four years before. After leaving school he was employed by Rotherham M C Engineers.
He enlisted on 21 April 1942 and joined the Royal Naval Patrol Service, service number LT/JX 350791 and gained a swimming qualification 8 July 1942. He served on HMS Avanturine, a mine-sweeping trawler of 296 tons that was completed on 24 March 1930 and taken over by the Admiralty in 1941. It was sunk by the German motor torpedo boat S-142 off Beachy Head on 1 December 1943. Roy Chesworth was 20 years old and is commemorated on the Lowestoft Naval Memorial. 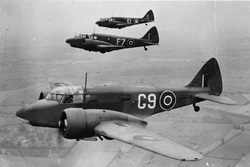 © IWM (CH 7471) Airspeed Oxfords in flight
William Casswell was born in the first part of 1921, only son of John Casswell and Lavinia (nee LawcockCasswell of 94 St John’s Road, Eastwood. William was a product of John’s second marriage, his first wife had died 10 years previously. William’s father was a joiner by profession.
William joined the Royal Air Force Volunteer Reserve, service number 1100639. He was a Leading Aircraftman (Pilot Under Training) when on 21 March 1941 he was killed when his aircraft, an Airspeed Oxford I - R6158 from 15 Flying Training School crashed on take-off at RAF Weston-on-the-Green, Oxfordshire. LAC Casswell only required a few more flying hours to gain his wings.
William Casswell was 20 years old when he died. He is buried in Rotherham (Moorgate) Cemetery.

Frank Colley was born in Rotherham in the third quarter of 1918 to youngest son of Ernest Colley and Eliza Jane (nee Heptonstall) of Florence Road, Rotherham,  they subsequently moved to Goole. He was educated at Rotherham Grammar School and Bradford University, and after marrying in 1944 lived with his in-laws at 22 Potter Hill, Greasbrough.
Frank joined the army in 1942 and was a Corporal in the 18 Mobile Ammunition Section of the Royal Army Ordnance Corps, service number 14304408. He was killed in an explosion in Emden in Germany on 1 June 1945, after the cessation of hostilities, aged 27 years old. Frank is commemorated on the Brookwood Memorial Panel, near Pirbright in Surrey Panel 19 Column 1 and has no known grave.

Philip Robert Coldwell the son of John Gravesy Coldwell & Minnie (nee Greenwood) of 124 Thorpe St, Thorpe Hesley, Rotherham. His wife Betty was from Wingate, County Durham, who he married in 1943.
Squadron Leader Coldwell, service number 954360, had a distinguished career in the Royal Air Force Volunteer. In February 1943 he was not only promoted from Flight Sergeant to Pilot Officer, but was also awarded the Distinguished Flying Medal. Flying with 7 Squadron from RAF Oakington near Cambridge. By September 1943 Coldwell had been promoted twice more and was then a Flight Lieutenant. On 24 September 1943 the London Gazette announced his award of the Distinguished Service Order to add to his DFM with the commendation: ‘Flight Lieutenant Coldwell has completed a large number of sorties, many of them to far distant targets in Germany and
often against heavy opposition. He is a navigator of exceptional ability and his work, carefully planned and brilliantly executed, has been reflected in the repeated successes obtained. Flight Lieutenant Coldwell is a most valuable member of the squadron and his praiseworthy qualities have set a high standard.’ He also had lucking
escapes. On 27/28 March 1943 in Short Stirling Mk 1 R9255 with markings MG-G flying to Berlin. His aircraft was hit by flak over the target area, which damaged the port outer engine. On return to base at 03:48 the Stirling swung off the runway and its undercarriage collapsed, luckily no one was hurt. By 19 May 1944 Squadron Leader Coldwell had complete 85 missions and was on his third tour of duty (30 missions was a normal tour of duty before being rotated to non-front line duties). On that night he was airborne in Avro Lancaster Mk III serial number ND845 with 7 Squadron markings of MG-C at 22:22 from RAF Oakington. The pilot of his aircraft was the Commanding Officer of his squadron, a brilliant young New Zealander Wing Commander with four gallantry awards. This aircraft was also the most important of the 116 bombers (112 Lancasters and 4 Mosquitos) on that bombing raid to the railway marshalling yards in Le Mans, France, it was the Master Bomber. This raid was one of
numerous attacks on the infrastructure in France as part of the build up to D-Day. Coldwell’s Lancaster was hit by flak and tragically collided with the aircraft of the Deputy Master Bomber. Both aircraft crashed, Coldwell’s about 2 miles North West of the airfield at Le Mans, with the loss of both aircraft and all 15 crew. At 24 years old Philip Robert Coldwell was laid to rest in the Le Mans West Cemetery with the other crew on 24 May.

Notes
Philip R Coldwell is listed on the Durham University Roll of Honour.