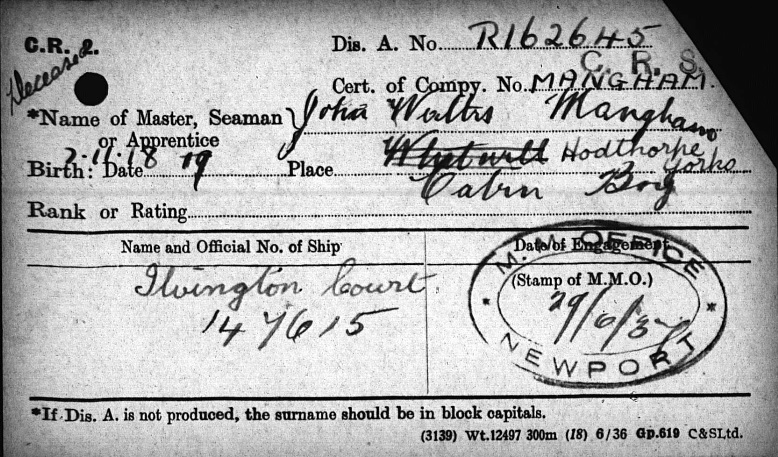 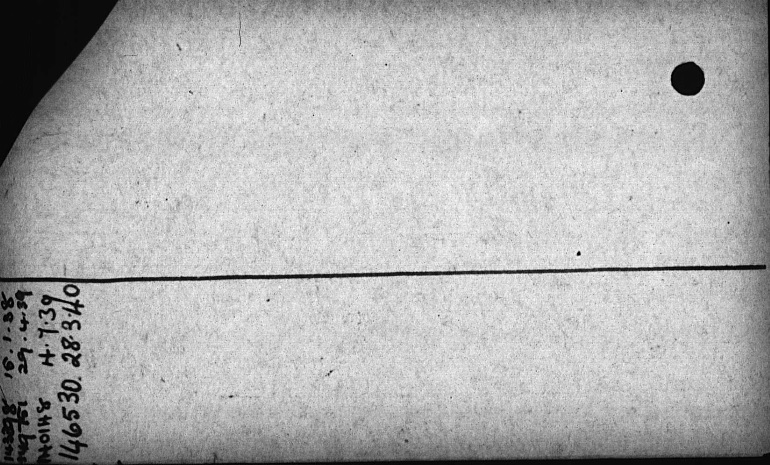 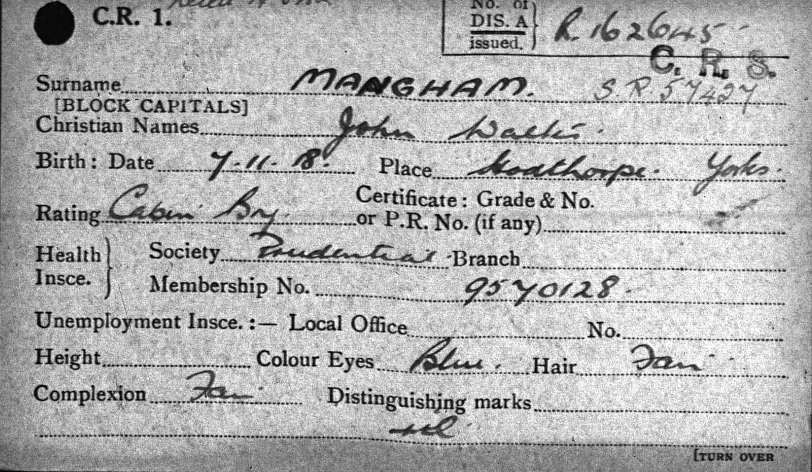 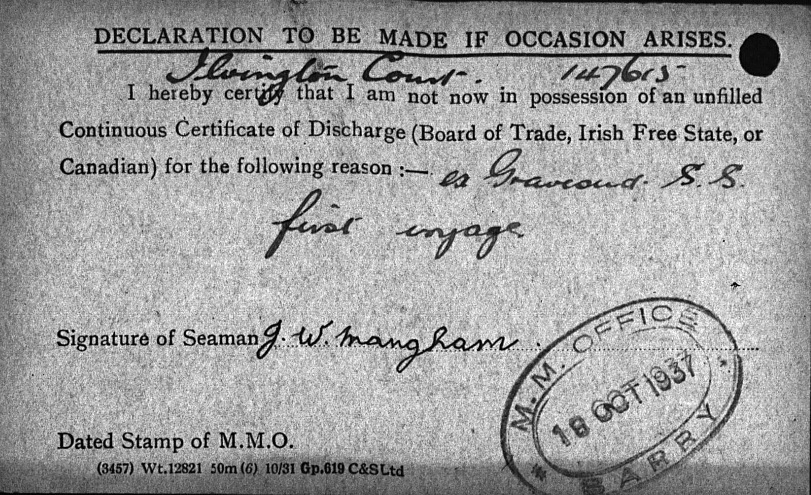 Eric Moore was born in 1919, the only child of Walter Percival Moore and Edith (nee Booth). His birth was registered in the last quarter of 1919 in Ecclesall Bierlow Registration Area, the same district as Walter and Edith married within five year previously. His father died when Eric was only 18 months old. Latterly his mother lived at 5 High Street, South Anston.
Eric became a merchant mariner and in 1940 was the First Radio Officer on the SS Ashcrest, a London registered steamer. The Ashcrest which was built in 1920 had been bought in 1940 by Britain and sailed for the company Crest Shipping. Since March 1940 the Ashcrest had sailed to and back from North Africa, Southern France and North America. On 16 October 1940 she left Milford Haven and arrived in Philadelphia on 6 November after crossing the Atlantic with Convoy OB230. After loading up with steel the Ashcrest left Philadelphia on 16 November and sailed independently to Sydney on Cape Bretton, Nova Scotia to join up with Convoy SC13. The 32 ship convoy with six escorts left Sydney CB on 22 November 1940, and although the convoy was Liverpool bound the ultimate destination of the Ashcrest was Middlesbrough. On 7 December, the Ashcrest, was straggler behind the convoy and sent in a distress signal that her rudder was broken in 54°35N/09°20W. No further news was heard from the vessel and it was reported missing thereafter. In reality the signal also alerted a German submarine, U-140 which sighted the stopped ship in the evening on 8 December and fired one G7e torpedo at 20:20 hours. The torpedo became a surface runner and missed, so after five minutes a second G7e torpedo was fired that hit underneath the bridge and broke her in two. The fore-ship sank immediately and the remaining part after 10 minutes, in a position about 80 miles north west of Ireland. Everyone on the vessel, the master, 36 crew members and one gunner, were lost. Eric Moore was 21 years old and he is commemorated on the Tower Hill Memorial.

Notes
U-140 just about survived the war, it was scuttled on 2 May 1945, in the Raederschleuse at Wilhelmshaven. Despite the longevity of the boat it only went on three patrols during the entire war and sank only 2 ship other than the Ashcrest. 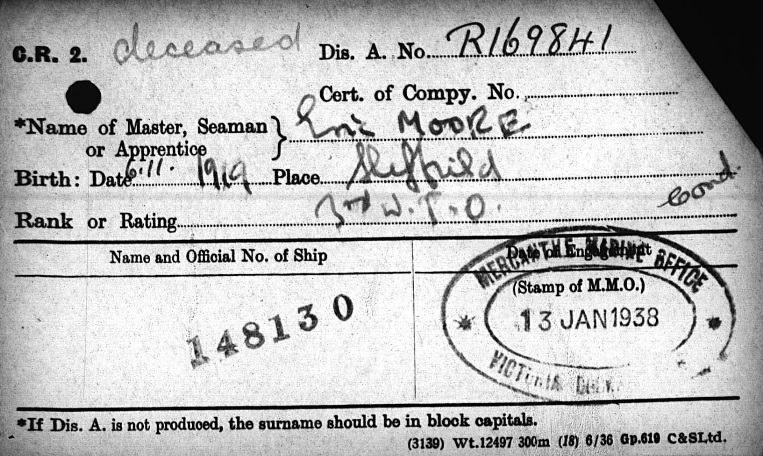 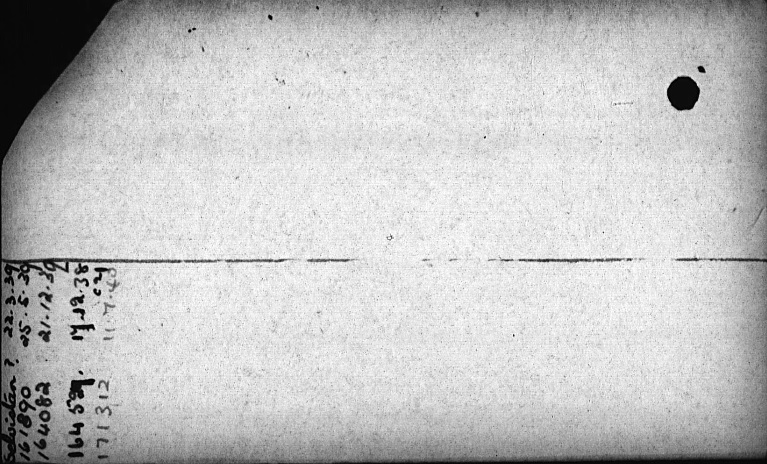 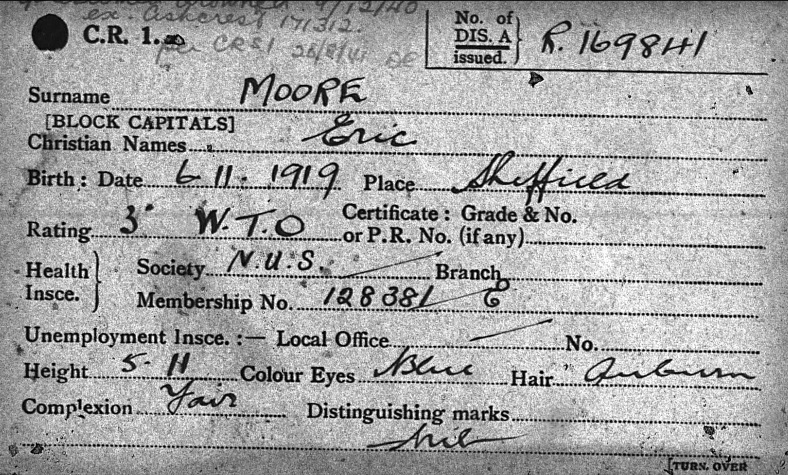 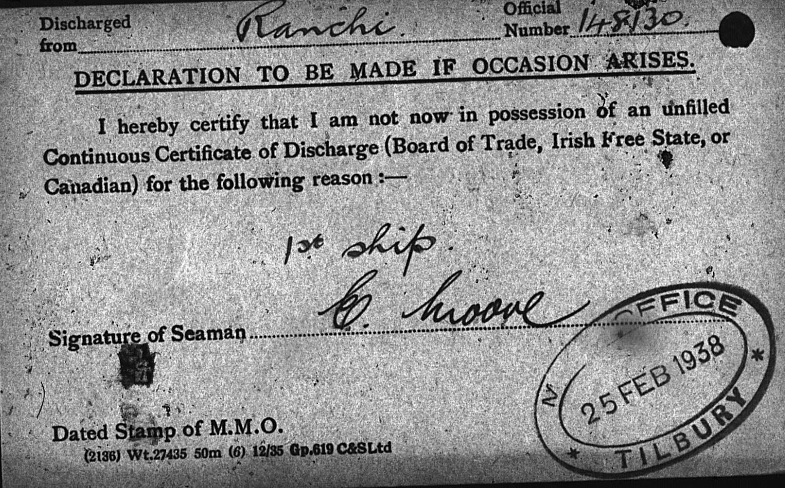 James Malcolm Snowden was the son of Ernest Alfred Snowden and Emily B (nee Allen), and his birth was registered in Worksop the third quarter of 1920. He was a member of the Scouts belonging to the 73rd Doncaster (Dinnington St Andrew's) Group.
He joined the Royal Air Force Volunteer Reserve, service number 1108099, and became a Sergeant flying with 209 Squadron. The squadron was a flying boat squadron operating a number of different types since 1930. Early in 1941 it began operating the Consolidated PBY Catalina, the type that would become its mainstay for the majority of the war. Then in October of that year the squadron moved to Kipevu, East Africa. On 20 August 1943 Sgt Snowden was a Wireless Operator / Air Gunner on a Catalina IB serial number FP302 which was taking part in a non-operational night time training mission to practice depth charge attacks on pinnace (a small boat). It is thought that the aircraft clipped the sea with its wing whilst searching for the target with ‘special equipment’ and crashed at 20:00. Initially one wing was located and whilst it was being towed ashore it sank. At first light no other debris was located and there were no survivors from the 10 men onboard, which included a ‘passenger’ and also the commanding officer of 209 Squadron flying as 2nd Pilot. James Malcolm Snowden was 22 years and is remembered on the Alamein Memorial. 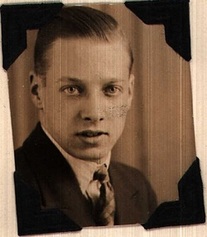 Ralph Skelton Woolass was born in Sheffield on 23 September 1917, son of Stanley Woolass and Jessie Gertrude (nee Skelton). As a boy he attended King Edward VII School in Sheffield from 1926 to 1934. After Ralph left school, the magazine of December 1934, in an article on the school orchestra, laments ‘the ranks of the strings have been thinned by the departure of such veterans as Woolass …’. In the late 1930’s Ralph lived at 263 Richmond Road, Handsworth, Sheffield. As a young man Ralph was keen of flying and gained his aviators certificate with the Great Britain, Royal Aero Club for gliding in 1938. Ralph’s parents were later to live in North Anston.
When Ralph joined up he was in the Royal Air Force Volunteer Reserve. The London Gazette of 22 August 1941 published a note of him being granted a commission effective from 20 May 1941. As a result he was promoted from Sergeant to Pilot officer which consequentially resulted in his service number changing from 1064093 to 102073. Ralph was a pilot with Fighter Command’s 234 Squadron flying the Supermarine Spitfire. On 16 April 1942 Ralph was airborne from RAF Ibsley, Hampshire in Spitfire Mk Vb, serial number AR374 (the airframe had been delivered to the squadron on 14 March) for a mission over the Channel. He was shot down by Messerschmitt BF 109s off Cap de la Hague, the north west corner of the Cherbourg Peninsular in France. Ralph Skelton Woolass was killed, aged 24 - officially posted as ‘previously reported missing, now presumed killed in action’. He is commemorated on the Runnymede Memorial. 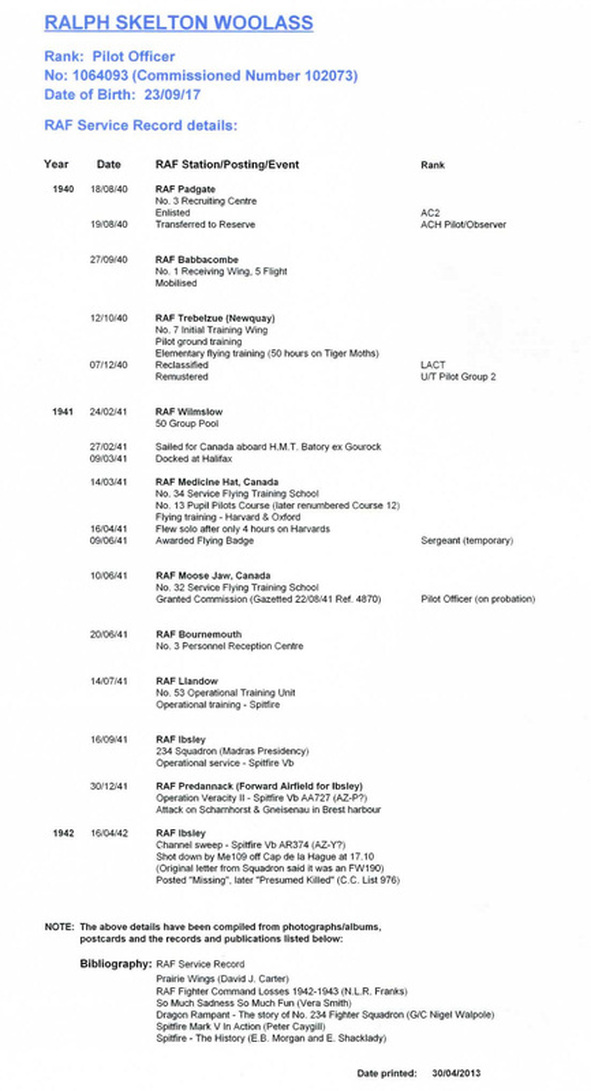